Credits
Lyrics and graphics for this parody  of “It’s My Party” by Shelley Pineo-Jensen with production, instrumentation, and back-up vocals by Mike Jensen.
The original Leslie Gore hit song was credited to John Gluck, Wally Gold and Herb Weiner, staff writers at the Aaron Schroeder Music firm in 1962, but according to Wikipedia, the lyrics were actually written by Seymour Gottlieb, a freelance songwriter.
For more music videos by Shelley & Mike, check out Dr. P-J’s website:
drpj.weebly.com/blue-pearl

It’s My Party ParodyChorus:
It's my party, and I'll cry if I want to
Cry if I want to, cry if I want to
You would cry too if it happened to you
Nobody knows where my party has gone
Looks like Hillary stole it.
Why is there primary fraud?
Voters s’posed to control it.
Chorus
Bernie will make the best president.
He’s against fracking.
He’ll block the TPP
And he’s got our backing
Chorus
Debbie and Hillary walked through the door,
Hill’s a queen coronated.
Oh what a party surprise;
It was barely debated.
Chorus
Stealing our party just pissed us off
We won’t unite
We’ll stand with Bernie for good
And we’ll win this fight
Chorus
Bernie ran in each primary
Giving us a solution
There was cheating all over the place
We need a revolution.
Chorus
Repeat Chorus 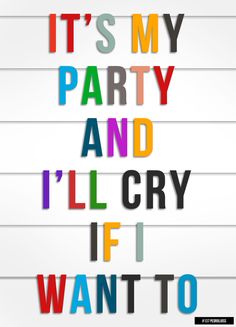